I – as Your Writing – can only speak the truth of the moment. I know no more about the future than you do. The future is unknowable that is why it positions itself in a time not of the present or the past.

Those words settled a disturbance in me about how truth manifests itself through writing. More of my ‘critical’ meaning to come…

In June, I took part in a conference: Critical Voices 2016. 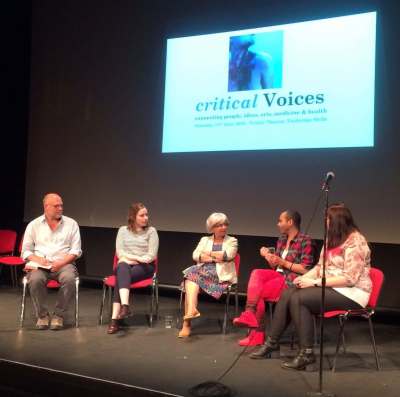 Artists, performers, erstwhile patients, health professionals and academics came together for the annual conference to discuss aspects of practice, humanity and healing. Critical Voices was held in Tunbridge Wells, Kent. My own contribution was a reading of prose and poems written about (but after) serious episodes of clinical depression.

Those of us presenting spoke from the stage in the Trinity Theatre, somewhat blinded by the lighting, to an audience sitting in tiers. I’m more used to the flat dimensions of a public and neutral space in a community centre, café or university.

The atmosphere was a bit theatrical which was thrilling. I shared the stage with film-maker, Antonia Attwood. It was a brilliant pairing because we had overlaps in our presentations and lives. Mine through words, hers through images. Both about serious mental illness.

Antonia’s films are evocative; the first one I looked at on her web-site really disturbed me. Six minutes long, it felt as if it was going on forever. She had collaborated with her mother (also a film-maker and diagnosed with bipolar mood affective disorder) to make a short film called Everest. A heap of household objects are piled on a bed – all in muted colours of greys, whites, yellows and black – with a rumbling sound track and crashing crescendos as these objects fall off the stack like an avalanche in slow motion. As a short film layered with symbolism Antonia creates a ‘feeling’ of mental illness.

She showed extracts from several films at the ‘Critical Voices’ event. Afterwards a conference delegate said she should have given the audience a warning – presumably as news presenters do about war scenes on television. The nature of Antonia’s work is to depict feelings about what it’s like to be mentally ill. Her films last for just a few minutes. Around five minutes…that’s all. It is a personal war zone after all for those of us who have suffered and have had to live in acute states of mental illness 24/7. It is an unbearable experience with not much let up, even in sleep which may be disrupted. This was an audience prepared by informative notes and a preparatory talk. Mental illness is disturbing and Antonia succeeds in disturbing her audience. That is the essence of her work.

In these blog posts I have written about my own severe depressions, included various styles of writing which have helped me integrate the experiences of my ill-self with my well-self. During a Q & A session, another audience member, working with severely ill patients, made a suggestion to those of us on the stage that we were privileged to use an art form to express ourselves. We had now been joined by photographer, Daniel Regan who had shown stills of abandoned psychiatric asylums.  Taken aback, we both talked about how these art forms contained the chaotic lived nightmare of being ill after recovery, not whilst in a state of incapacity.

The Truth & Lies of Writing

A series of Letters was one of the ways I wrote about my depressive illness long after the episodes I’d experienced in my twenties and forties. The Illness was personified; the replies naturally written by myself.

In my many years of wellness it felt impossible to believe I’d ever be ill again and in 2005 my writing predicted I’d never experience another serious illness. Yet two more illnesses came in 2007 and 2009 which knocked me over and under. That made me feel a deep criticism (this time the pejorative meaning) about my writing.

I had believed my own prediction. How naïve could I have been? How could I have treated this writing as an oracle? There are times when my writing feels magical – as if from an invisible unknowable entity coming through me. It didn’t, however, feel like wishful thinking.

The words were staring me in the face. Visible. Externalised. Evidence of a reality. But was it real, rational? No. It was about the future – also unknowable. But I wanted certainty about being well for the rest of my life. (This correspondence is lengthy and I’ve not included it in any of my blog posts.)

After the first set of Letters and Replies, I wrote a second series (2010) accusing my writing of having lied to me. The two sets of correspondence, written five years apart, have been pivotal to my writing and the presentations I’ve given on mental illness.

Here’s a couple of extracts from the later writing (2010). It’s clear, however, I was writing to both Writing and Illness. Illness is addressed directly:

Illness,
You said emphatically and I quote your own words: I will not be visiting again. And you did. Not: why did you return? Because I know there is no satisfactory answer. Why did you allow me to write those words, those untrue words? Why when I trust you my Writing, did you lie to me? Writing as Liar. I didn’t expect that. I expected better of you.   Monica

By the end of the letter, I’m really addressing my writing. I followed with this piece in the Voice of my Writing:

I – as Your Writing – can only speak the truth of the moment. I know no more about the future than you do. The future is unknowable that is why it positions itself in a time not of the present or the past. It’s unpredictable by its very nature. I can only be true in the moment. It’s not a lie to make statements which are intentions expressed for the future. But the future cannot be pinned down. I’m not a liar in the present.

In hindsight it’s obvious that my writing can only be a reflection of my thoughts in the now of the present. I’ve always been lucky not to have an ongoing condition. When I’m ill I’m very ill. When I’m well I’m very well. Now, however, with a greater integration within my psyche I am more circumspect and humbled about my own vulnerability.

It has taken me all my life – right past my mid-sixties – to integrate those terrible times into being a whole self. This performance in Tunbridge Wells was of a different quality from previous readings I’ve given. Here was an audience sitting in darkness whilst I was in the limelight. An inverse mirror from the ill experience of being in the darkness whilst the rest of the world is in the light. To be well and on a stage, to be heard by others, including those from the medical profession, to read aloud the words I had put onto the page – all of this gave me a sense of owning my particular power. Completed a feeling of acceptance and wellness.

I remember an occasion when I was in the Eastbourne hospital ward and a tabloid was lying on the table. I saw a piece about a best seller from an author who was part of my writing group. And here was I in the ‘world of the ill’ to quote Virginia Woolf. And my writing friend was in the ‘world of the well’ and becoming known for her historical novels. And all I was able to do was pace a hospital corridor (see poem: Hospital Corridor – March blog).

The stigma surrounding mental illness is finally falling away as more and more people are talking about their experiences – I have witnessed it change in my life-time. Although my parents would probably turn in their graves if they knew I had spoken in public – on a stage no less –about such matters as my own depressive illness.

At last I may rest on a metaphorical ledge from a long uphill climb of gathering all the strands of my life: the bad, the good, the private and personal – with the public acknowledgement of what my mother said (the illness) should never have happened. Life should be perfectly arranged like museum objects behind a glass case. Polished like the antiques in the house I grew up in. Manicured like their garden lawn. These physical structures probably sheltered them from the messiness of real life and also helped them cope with their daughter’s fall from grace.

Well the long and horrible illness did happen. Six times. And I have spoken about them publicly ever since I started this blog in the autumn of 2014. I may speak again. But I am done with writing anything more about them. I don’t like the word ‘closure’. Because I think nothing really ends. In my life I find new forms for what has been. I don’t make endings. I make new connections.

Notes:
Antonia Attwood is a film-maker of still and moving images interpreting the phenomenology of mental illness. http://www.antoniaattwood.com

Critical Voices is an event curated by Graham Shaw and part of a growing movement to understand medicine, illness and health, through insights from the arts. This year it was held on Saturday 11th June at the Trinity Theatre, Tunbridge Wells, Kent.

References:
On Being Ill in The Moment and Other Essays by Virginia Woolf [1930] (1981) London: The Hogarth Press.

Extracts from my book ms – Chapter 10: The Truth & Lies of Writing

3 thoughts on “Creative and Therapeutic Writing”